Reaching Beyond Words: Storytelling as Key to Building Communities 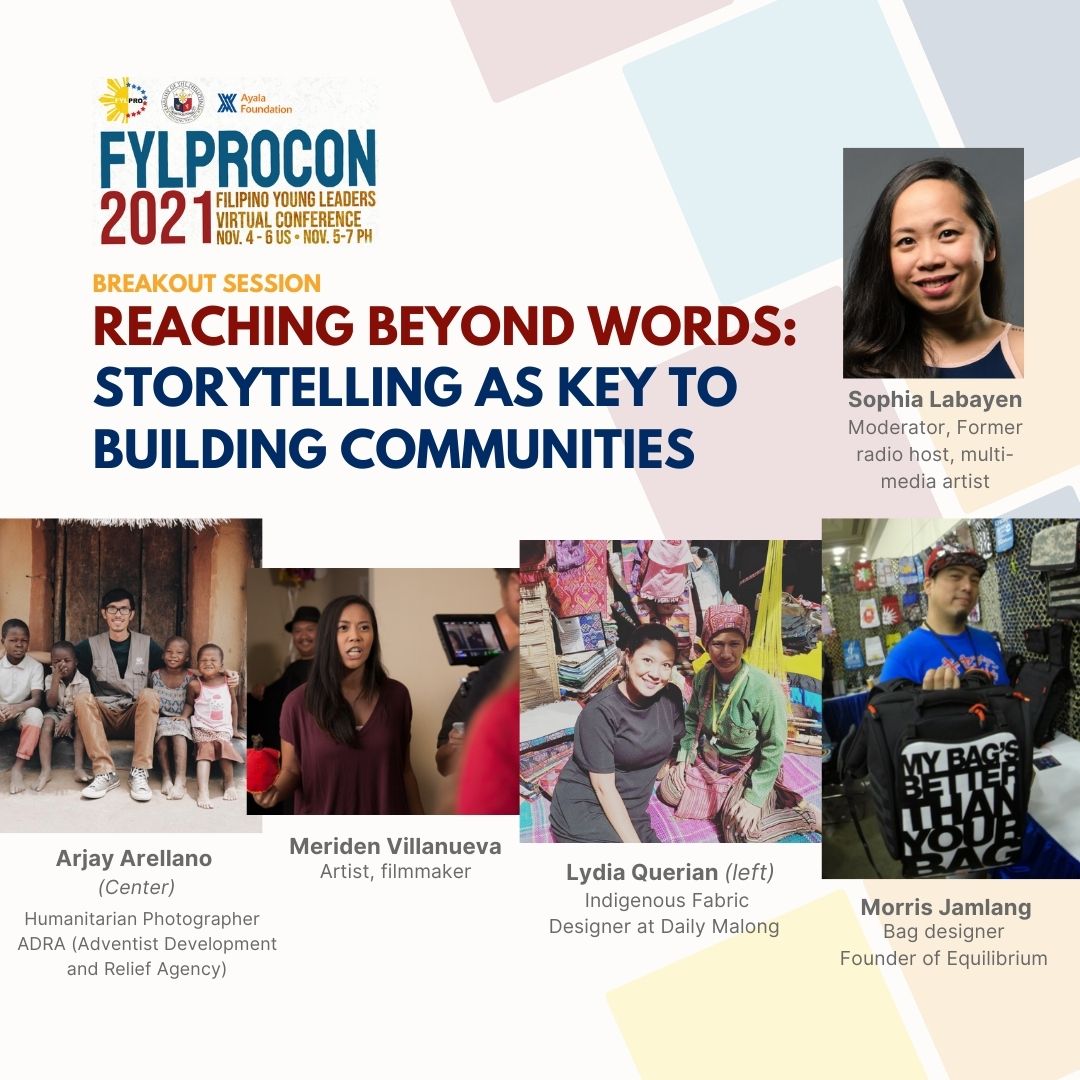 We love telling stories. With words, stories are heard. But with heart in the craft, stories are felt. With their chosen medium, our panel will each share the “Why” behind their craft and the stories that transcend time and place.

Sophia Labayen is a former FM radio host and producer. She has professionally hosted numerous events ranging from weddings, concerts, seminars and sporting tournaments. She now owns and operates a photography studio specializing in food and product photography. Sophie graduated with a degree in Broadcast Communications from the University of the Philippines in Diliman, Quezon City.

Arjay Arellano is a humanitarian photographer and filmmaker. He has documented the plight of people in extreme poverty, refugees, and internally displaced people in communities affected by disasters. He has traveled to several countries around the world supporting the work of the Adventist Development and Relief Agency International. Prior to being based in the states, he was a faculty of the University of the Philippines, teaching Broadcasting and Media Studies. He is a passionate storyteller who strives to highlight stories that promote social justice, peace and equality.

Meriden Villanueva is a Filipino American actor, writer, and producer. She has a Bachelor of Arts degree in Broadcasting and Visual Media with a concentration in TV and Film Production from Seton Hall University.  She currently serves on the Board of Directors for the Pilipino Workers Center and was former Executive Director for FilAm Creative. She was also one of the ten selected delegates for the Filipino Young Leaders Program (FYLPRO) in 2018 and received an award for Emerging Leaders at the The Outstanding Pilipinos Awards in 2019. She has acted in Filipino American movies including “Lumpia With A Vengeance,” “Stateside,” and “Jeepney.” She wrote, produced, and starred in her short film called “The Coconut Chick.” She is a member of the Screen Actors Guild-American Federation of Television and Radio Artists (SAG-AFTRA) and is represented by SoCal Talent, Pretigious Models, and Image Powerhouse.

Lydia Querian is a designer, dancer, and musician who left her corporate career to pursue cultural work. Born and raised in the Philippines who lived in San Francisco for 10 years and now based in Hawaii. She’s done several performances, having toured nationally and internationally with Dancing Earth, KulArts, Parangal Dance Company and Fusion Dance Project. Querian was a featured artist at the Smithsonian Folklife Festival in 2017. Lydia completed Fashion Design and Fashion business certification from Parsons New School and as her work evolves, she frequently immerses with indigenous communities in both Southern and Northern Philippines. Her work was recently featured at this year’s SS21 New York Fashion Week. Daily Malong helps empower Indigenous Filipino artisans to continue their living traditions by extending appreciation in the diaspora. She believes that bringing indigenous weaving practices to the future perpetuates time-tested traditions, helping the present and protecting the future. Each indigenous textile worn today helps wearers and weavers navigate societal atrocities, prevent climate change, and restore a more sustainable environment.

Morris Jamlang is the Co-Founder/Creative Director of Equilibrium U.S.G. (Urban Survival Gear) in Chicago, IL USA. He was born in Manila, Philippines and came to the states at the age of 14. Out of high school he enlisted for 8 years in the US Army as a Combat Engineer and now an honorably discharged veteran. In college, Jamlang was classically and technically trained in multiple facets of art including drawing, painting and sculpting as well as 3D and graphic design. After 15+ years of experience in commercial art in the video game, automotive aftermarket, advertising and web design industry under his belt, combined with the tutelage and mentorship of his father, who had over 20+ years of extensive experience and resources in the bag manufacturing industry, he created his first modular gear and accessories company, Equilibrium U.S.G., in 2005. He was later granted a utility patent for his modular system in 2014.