Filipinos in government: Who’s on the table, who’s on the menu? Presented by NaFFAA

Home > News > CIVIC ENGAGEMENT > Filipinos in government: Who’s on the table, who’s on the menu? Presented by NaFFAA 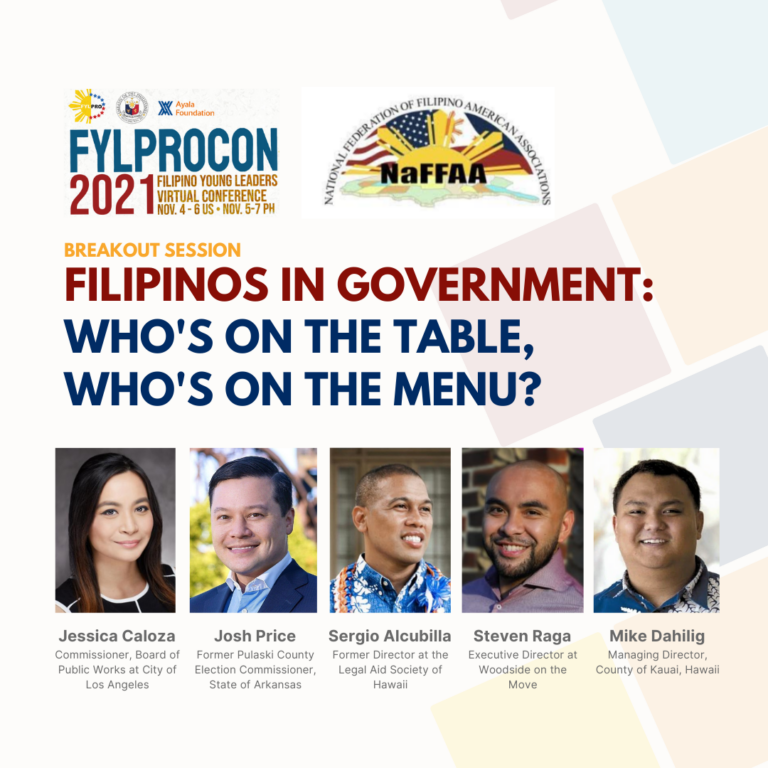 With four million strong in the United States, the amount of representation we have in seats of power is still disproportionate. Are we getting there, though? This panel will explore the importance of representation and engage the viewers with their stories and observations as community leaders. In addition, NaFFAA also conducted a leadership series exploring campaign support for those interested in running for office. Get the key takeaways from our presenters.

Jessica Caloza is a Commissioner on the Board of Public Works, the governing and oversight body of more than 5,500 employees responsible for delivering critical services and infrastructure projects in the City of Los Angeles. She was appointed by Mayor Eric Garcetti in February and confirmed by the City Council in March 2019. She is the first Filipina American to serve on the Board and is the lead Commissioner for the Bureau of Engineering.

Previously, Jessica served as Mayor Garcetti’s Director of Scheduling since 2017, overseeing the Mayor’s entire scheduling operation — including strategic planning, day-to-day logistics, and coordination with various Departments and agencies. She also served as Deputy Director of Scheduling, and came to the Mayor’s Executive Office from the Office of Immigrant Affairs, where she helped lead the City’s immigration policy, grant programs, and civic engagement initiatives focused on expanding access to resources for immigrant communities.

Prior to joining the Los Angeles Mayor’s Office, Jessica served in the Obama Administration in the U.S. Department of Education — where she worked on higher education policy, Congressional and legislative affairs, student data and privacy, immigration policy, and gender equity issues. She has also been a campaign aide to several members of Congress, including former Rep. Xavier Becerra of California; former Rep. Mike Honda of California; and Rep. Albio Sires of New Jersey. In 2012, she was a community organizer for President Obama’s reelection campaign and helped lead various field offices in Virginia.

Jessica is also passionate about giving back to the community and volunteers with various Asian American and Filipino American organizations. In 2014, she was selected as one of ten delegates for the Filipino Youth Leadership Program (FYLPro), an international leadership program led by the Ambassador of the Philippines. Most recently, she served on the boards of KAYA: Filipino Americans for Progress, FYLPro Executive Committee, and the Leadership Council of the Center for Asian Americans United for Self Empowerment (CAUSE).

A graduate of the University of California, San Diego, Jessica is a proud first-generation immigrant.

Joshua Ang Price is from Maumelle, Arkansas. His father is from the small town of Antoine, Arkansas and his mother is a registered nurse from Roxas City, Capiz, Philippines who was recruited to work in rural America.

Joshua is involved with civic, nonprofit, and philanthropic organizations focused on advancing minority small businesses, access to mental health care, historic preservation, and the arts. Joshua is the president and co-founder of the Asian American Pacific Islander Democratic Caucus of Arkansas. In 2018, he ran for State Representative — the first Filipino-American to run for that office in Arkansas’s history.

Joshua attended the University of Central Arkansas, where he studied sociology, public administration, and community and city planning.

Sergio Alcubilla III served as an attorney and the Director of External Relations at the Legal Aid Society of Hawaii, a non-profit, public interest law firm where he focused on providing legal help, advocating for the interests of the most vulnerable in our community, and improving access to justice throughout the state. In this role, Sergio helped establish court self-help centers statewide and through his leadership, involved over 500 volunteer attorneys to help nearly 35,000 residents with their legal needs.

Sergio has served on various committees of the Hawaii Access to Justice Commission, is a board director of the Hawaii Filipino Lawyers Association, and is an active board member and volunteer for the Hawaii Workers Center, a non-profit organization that advocates for the rights of low-wage workers. Sergio was selected by the Hawaii State Bar Association as a Leadership Fellow and honored by Pacific Business News’ 40 Under 40.

Sergio is a graduate of the University of Florida with a double major in political science and economics, holds a Master’s degree in religious education from the Unification Theological Seminary, and a law degree from the William S. Richardson School of Law. He was born in Iloilo City, Philippines and currently resides in Honolulu, Hawaii.

Steven Raga currently works as the Executive Director for Woodside on the Move, a 45-year old advocacy and education non-profit in NYC. Most recently, he served as Northeast Regional Manager for Policy & Advocacy for the Susan G. Komen Breast Cancer Foundation, Chief of Staff at the NY State Legislature, Campaign Manager for Assemblyman Brian Barnwell, and was previously Senior Strategist for Multicultural Leadership at AARP. Currently, he is also a NY State Advisory Committee Member for the US Federal Commission on Civil Rights, appointed under President Obama, where he has conducted investigations on housing, policing, education, and prison reform. He also currently sits on the boards of Queens LGBT Pride, the National Federation of Filipino American Associations (NaFFAA), and Pilipino American Unity for Progress (UniPro) which he founded in Woodside in 2009. Steven also holds appointments as a Member of NYC Community Board and the Queens District Attorney Advisory Commission.

Steven is currently completing Cornell University S.C. Johnson Graduate School of Management’s and Weill Cornell Medicine’s Dual MBA/MS in Healthcare Leadership program and an Executive Certificate in Social Impact Strategy from the University of Pennsylvania School of Social Policy & Practice. He holds an MPA from the Baruch School of Public Affairs via the National Urban Fellow Program, a Graduate Diploma in International Human Rights Law from the American University in Cairo, a Masters in Public Policy & B.A. in Political Science from Stony Brook University, and recently graduated from Harvard University Kennedy School of Government’s Senior Executives in State and Local Government program.

Michael Dahilig currently serves as Managing Director for the County of Kauai in Hawaii, the youngest individual in the County to be appointed to that position. He was formerly Planning Director and a Deputy County Attorney for the Kauai County. He volunteers as legal counsel at the Kauai Filipino Chamber of Commerce, Kauai Philippine Cultural Center and Honolulu Filipino Junior Chamber of Commerce. He was also Vice Chair of the National Federation of Filipino American Associations (NaFFAA) and a Board Member of the Sariling Gawa Youth Council. Michael served in the University of Hawaii Board of Regents, where he graduated with a Masters of Urban and Regional Planning and a BS with honors in Geology and Geophysics and minor in Political Science.