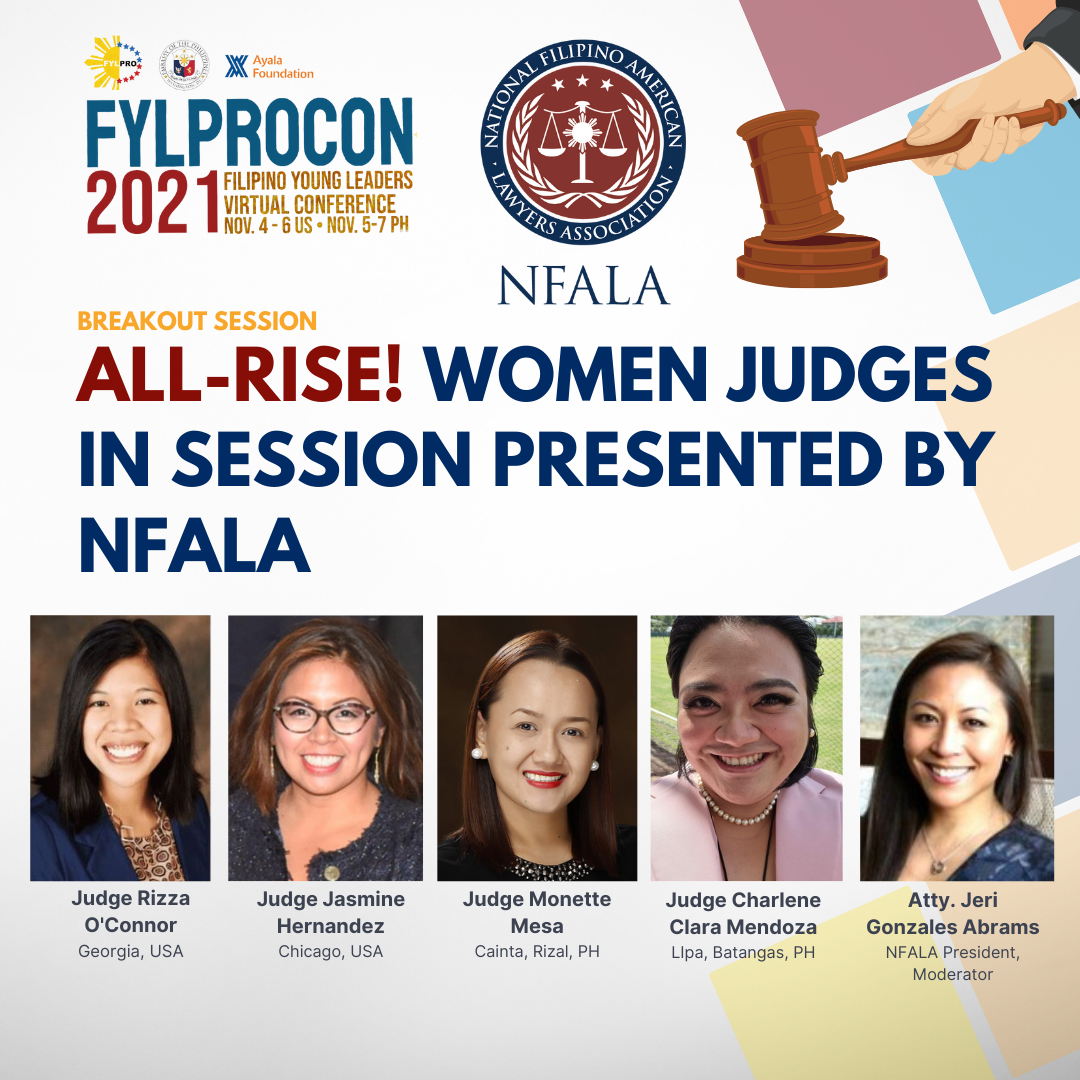 Hear four stories from our distinguished panel as they share experiences and lessons learned from their career journey and in building communities and the justice system.

Judge Rizza O’Connor is the Chief Magistrate Judge of Toombs County and the first Filipino-American Judge in Georgia. Prior to her appointment as magistrate in November 2013, she worked as an Assistant District Attorney for the Middle Judicial Circuit and the Eastern Judicial Circuit. She presides over small claim civil cases and criminal warrant and bond hearings.

Rizza’s parents immigrated from the Philippines in the early 1980s and settled in Savannah, Georgia where they raised Rizza and her two sisters. Rizza graduated from Mercer University in Macon, Georgia in 2007 with a Bachelor of Business Administration degree. She received a Juris Doctor from the Walter F. Georgie School of Law at Mercer University in 2010 where she served as Student Bar Association President. Mercer University has since honored her with the Thomas Sewell Plunkett Young Alumnus Award in 2018 and the Mercer Law School Young Alumnus Volunteer of the Year Award in 2020.

From 2018-2019, Rizza served as the first Asian-American and 72 nd President of the Young Lawyers Division of the State Bar of Georgia. She was named into the 2018 Georgia Asian Times list of 25 Most Influential Asian-Americans in Georgia and was recognized as a Rising Star by the Daily Report in 2019. In November 2019, Rizza was the first Georgian chosen as a participant in the Filipino Young Leaders Program (FYLPRO). Through FYLPRO, Rizza travelled to Manila/Makiati, Philippines with 143 other Filipino-American young leaders from across the United States to learn more about the Filipino heritage and ways that they could serve as advocates for initiatives, programs and causes that advance US and Philippine relations. Rizza is also a member of this year’s class of Leadership Georgia and was named to the 2020 National Asian Pacific American Bar Association’s List of “Best Under 40”.

Rizza lives in Vidalia, GeorgiaA with her husband, Daniel and two children, Judson (7) and Evie (5).

Judge Maria Monette F. Mesa was appointed as one of the Philippines’ first roving or at-large judges. Prior to her appointment, Judge Mesa was a Court Attorney at the Court of Appeals, and was an active member of the Gender Committees of both the Supreme Court and the Court of Appeals. Judge Mesa taught law subjects in the Lyceum of the Philippines University and the Adamson University.

Judge Jasmine V. Hernandez is an Associate Judge with the Circuit Court of Cook County in Chicago, Illinois. Prior to ascending to the bench, Jasmine served as a staff attorney with the U.S. Department of Veteran Affairs’ Office of Chief Counsel – Midwest District. She served as litigation counsel in labor and employment matters pending before the Equal Employment Opportunity Commission and Merit Systems Protection Board. Prior to joining the VA, she was an assistant state’s attorney (“ASA”) with the Cook County State’s Attorney’s Office (“CCSAO”).

In that capacity, she prosecuted felony and misdemeanor offenses committed by both adults and juveniles, as well as focused on Internet sex crimes involving children. Sher served as co-chair of CCSAO’s Asian American Affinity Group. Before that she was the Administrative Supervisor and Compliance Officer for the First Municipal Division of the Circuit Court of Cook County. She earned my Bachelor of Arts from Boston University, Juris Doctor from University of Illinois College of Law, and Master in Labor and Industrial Relations from the University of Illinois School of Labor and Industrial Relations. Jasmine is active in the Chicagoland legal community, serving as past president of the both the Asian American Bar Association of Greater Chicago and the Filipino American Lawyers Association of Chicago.

Judge Charlene Clara Mendoza is one of the first Municipal Trial Court Judges-at-Large or Roving Judges under Republic Act No. 11459 primarily aimed to declog heavily docketed courts. Before her promotion to the Bench, she rose from the ranks in the Judiciary as Clerk of Court VI and Ex Officio Sheriff of the Office of the Clerk of Court -Regional Trial Court (“RTC”) of Batangas City and Clerk of Court V of RTC Batangas City, Branch 84, handling financial matters and assisting her judge, both administratively and adjudicatively. Before her government service, she practiced law as a Junior Partner of Mendoza and Mendoza Law Office and Associate of Baterina Baterina Casals Lozada & Tiblani Law Offices, handling administrative, criminal and civil law suits.

In only three years, Judge Charl graduated with the degree of Bachelor of Arts Major in Political Science from the De La Salle University – Manila with Honorable Mention. Inspired by her father, she proceeded to study law and graduated from the San Sebastian College Recoletos – Institute of law, immediately took the bar exam, and passed the 2010 Philippine Bar Exams.
Concomitant with her duties as an officer of the court, she promoted the welfare of her then fellow Branch Clerks as the Board Director for Region IV of the Clerks of Court Association of the Philippines (RTC-COCAP). She became an active member of the Integrated Bar of the Philippines, Batangas City Chapter and also served her fellow Batangueños through socio-civic projects conducted by the Junior Chamber International (JCI) Batangas Caballero. In her college years, she was President of the DLSU Political Science Society and Course Representative at the DLSU College of Liberal Arts. She used to be co-captain of the Basketball Varsity (2nd Team) of the Miriam College.

Due to her stellar work performance, Judge Charl was the sole awardee of the 2019 Outstanding Clerks of Court for the Second Level Courts, a prestigious award after a nationwide search by the Society for Judicial Excellence and Supreme Court of the Philippines. She was likewise a Nominee for the 2nd Gawad Balisong: Search for Outstanding Filipino Gamechangers of 2021 and a current nominee for The Outstanding Young Men 2021 by the TOYM Foundation and JCI Philippines.
Judge Charl came from a family of lawyers and they inspired her to become the woman she is today, an advocate of justice and the rule of law, and a believer in principles that to lead, one must learn how to serve and that public servants should be compassionate to others.

Moderated by:
Jeri Gonzalez Abrams, NFALA President (2021-2022), has practiced law since 2007 and practices exclusively in Immigration law. Ms. Gonzales is a member of the Washington State Bar Association, American Immigration Lawyers Association (AILA), the Oregon Chapter of AILA, and is the President of the Filipino Lawyers of Washington (FLOW).

Ms. Gonzales has handled many cases, including immigrant visa waiver cases, and has legalized many people before the various U.S. Consulates throughout the world and through USCIS. She handles family Immigration cases, deportation and removal cases, Immigration bond cases at the Northwest Detention Center in Tacoma and other Detention Centers, visas for families and businesses, and waiver cases for Immigration benefits.
Prior to joining the Firm, Ms. Gonzales worked as an in-house attorney for a healthcare organization, where she was responsible for negotiating, drafting, reviewing, and managing various types of contracts on behalf of the organization. Ms. Gonzales has also worked as an associate attorney at one of the region’s most prestigious law firms, where she gained significant experience in various areas of law, such as Business, Bankruptcy, and Real Estate.
Source: http://www.jgonzaleslaw.com/jerilynn-gonzales-abrams.html